Vector forms as a foreign language

The artificial intelligence GPT-2, disturbed by the learning of visual symbols, amplifies the strangeness, the abstraction and the instability of the language.

By integrating and analyzing large amount of texts in English, the artificial intelligence (AI) GPT-2, created by the non-profit organisation OpenAI can generate coherent texts in English on demand (including "fake news"). If it is trained again with a specific body of texts (for example, all of Shakespeare's plays), it can compose a comparable theater text. But this AI as well as mankind could not skip the difficulty related to all language learning. Depending on the degree of learning of the software and the fluctuation of translation - by mistake, by omission, by repetition, by contextual misunderstanding - subtle variations can disrupt the meaning of a word. And all the more so as the AI is not aware of itself or the meaning of its production.

I chose to seize this tipping point between artificial and human intelligence, a blurred moment between the ambitious but blind project of AI and that of the human, in this case the artist, able of subjective, critical and aesthetic, experimental and meaningful selection.

The originality of my work here is to disrupt the learning of GPT-2 by offering a foreign language no longer textual, but "visual". It is the SVG vector format that allows me to establish this transcription between text and picture. SVG is an ASCII format, which means, it can be read in a text editor; dots, shapes and colors of the picture are represented through text.
For example, the text defining the image of a "heart" emoji looks like this:

Despite its ability to understand and interpret the English language, GPT-2 is unable to use the information contained in an SVG to generate a new English text. Faced with such a constraint, it will try to write only by using this new syntactic form. It will then produces a vector picture that shows an original visual composition more or less close to the original pictures.

With the help of GPT-2, I will create a diversified production of uneven quality.
I then perform a strong selection of 10 pictures per 1000 generated on this production. I play with the phenomena of emergence: accidents and mutation…

I regain power over the production of GPT-2, both upstream, by feeding and disrupting the AI, and downstream, during skimming of the production. I emphasize the wanderings of any translation and deliver to the reader a strange and abstract language. A language that keeps or reveals its mystery by evoking familiar forms barely recognizable. And all the more so, that I chose to feed GPT-2 with a "vocabulary" known by most people : 1700 emoji from the Twemoji collection (Twitter). 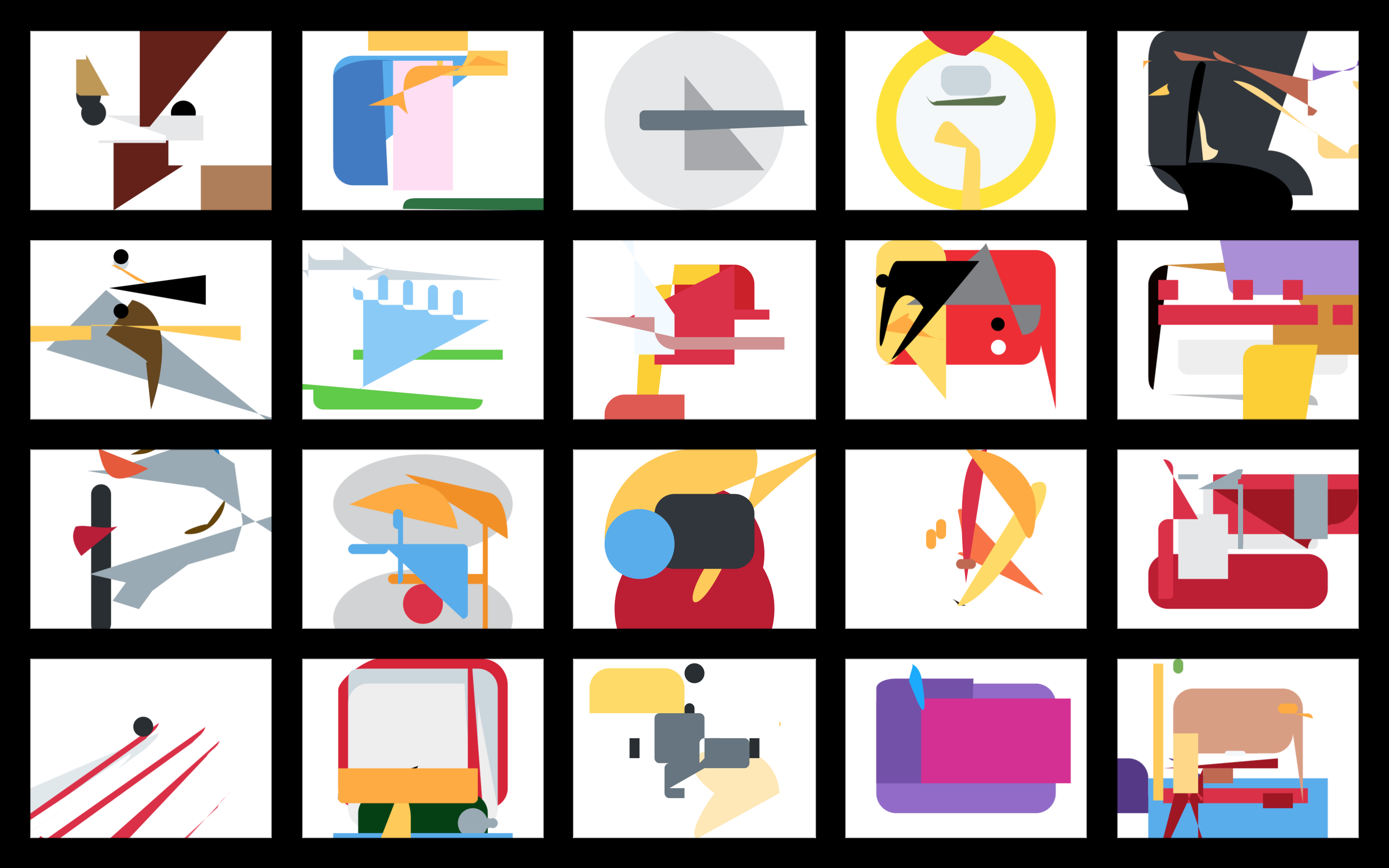 Emoji interest me for several reasons. These ideograms are nowadays used worldwide and they therefore function as a new and universal language. But surprisingly, this universality fades from the moment when they are spoken out or written in different languages. Their apparent simplicity does not prevent difficulties of translation that are at the heart of my problematic. When the universal language of emoji is translated, interpreted, hijacked by the AI, the reader can sometimes spot some familiar features of these emoji or in constrast, discover an abstract form without immediate meaning. The emoji, and even more their translation by the AI, are therefore asserted as a language in itself, like an ancient language that has faded away, of which only a few written traces and fragments remain, as in the case of hieroglyphs.

Thus, surprisingly, the AI so hijacked does not invite us to a pure and simple "translation - transcription", but it amplifies the strangeness and abstraction of language; it invites to an infinite creation of new meanings. In doing so, it refers above all to the living and elusive character of any language and culture.
This work also allows me to create a collection of outpaced remix (abstract shapes) and reflexive remixes (referential) which illustrate my positioning as an artist, in a state of tension between pure artistic experimentation and critical intention.

As a follow-up to this visual language research, I decided to train GPT-2 with most of the world’s alphabets, using the Google Noto font collection. From these fonts, 16300 SVG were collected, an accumulation of text descriptions of each letter’s shape. With this new training, GPT-2 wrote new shapes, new glyphs in black and white.

Finally, with the constraint to create a new font, I chooses abstract shapes with some resemblance to the letter of the Latin alphabet : 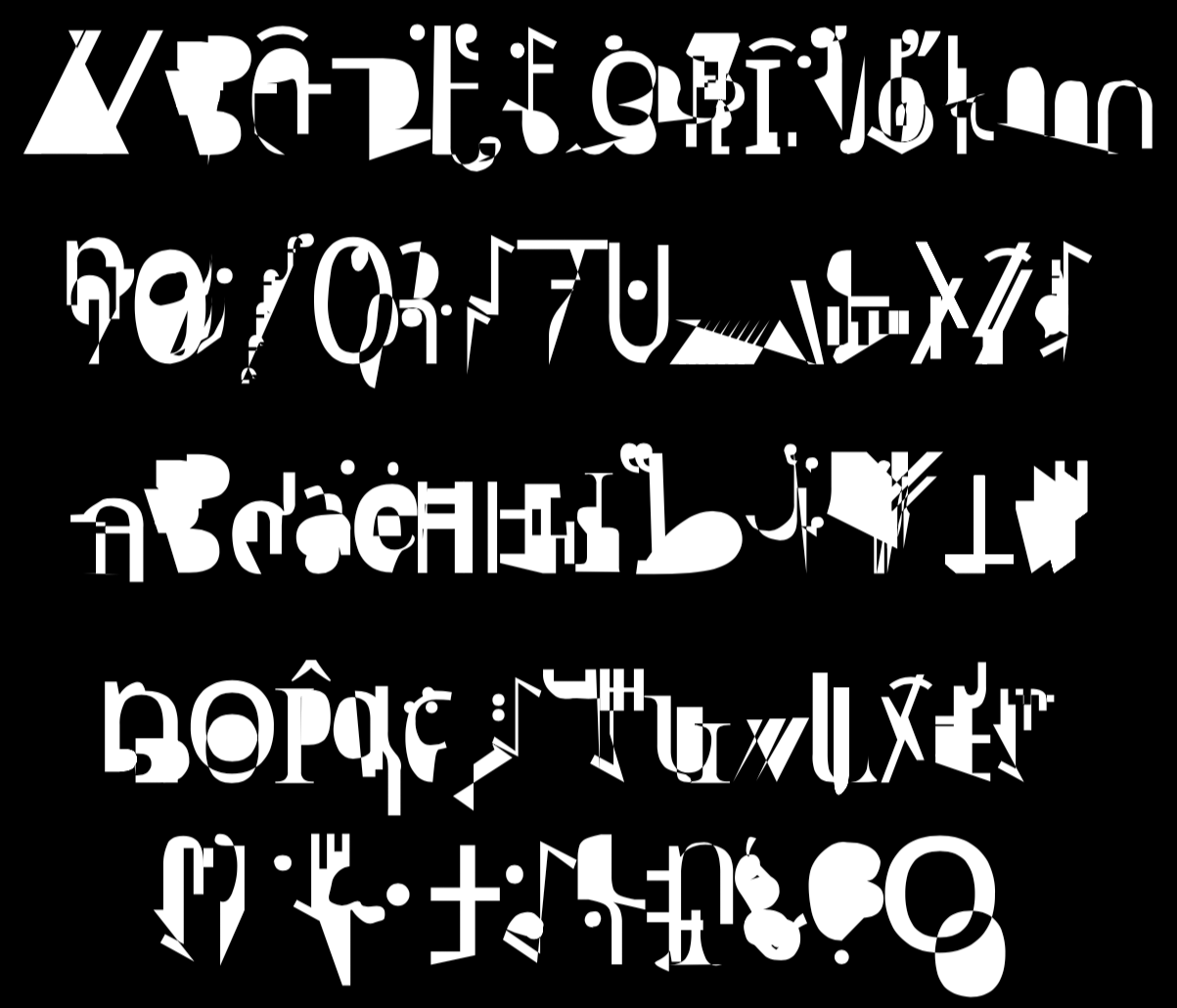 Vectoglyph-Noto.ttf - "The quick brown fox jumps over a lazy dog" 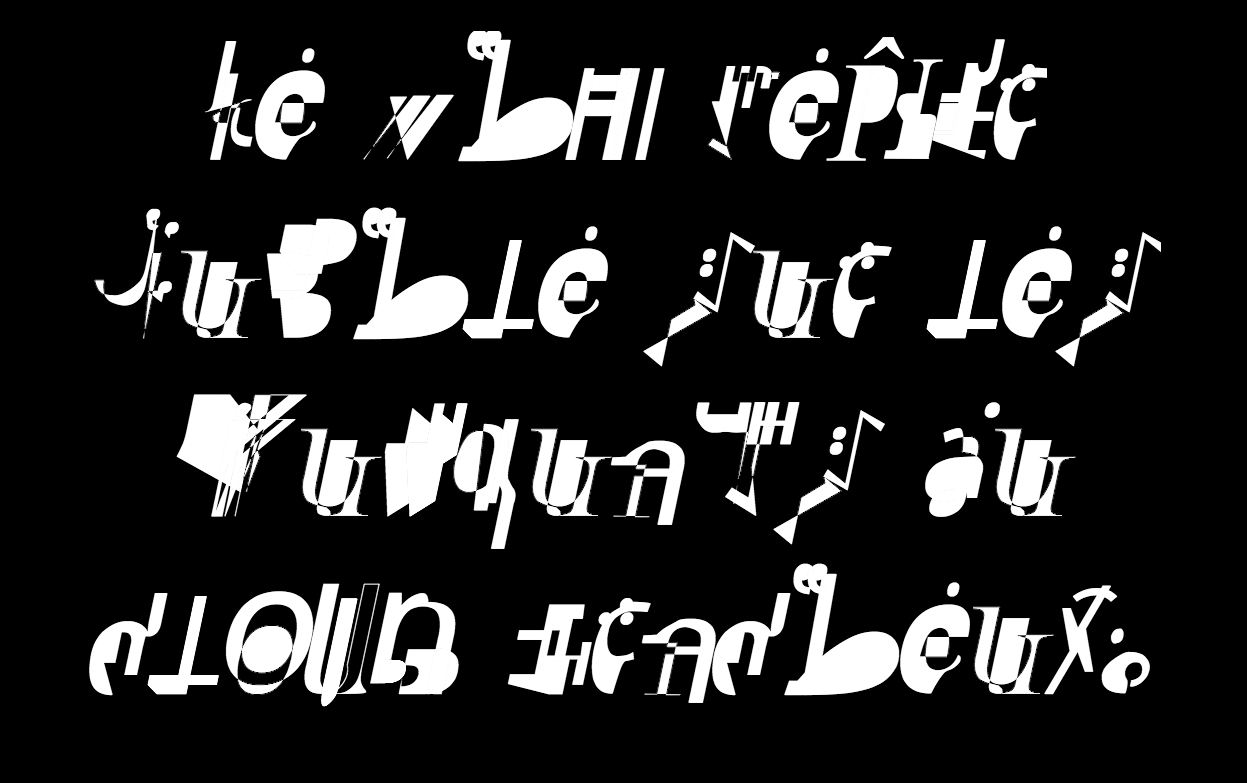 Wall trope is a part of an ongoing research on remix, copyright and authorship. I compose with fragments of movements evolving during time. ……